A Year in Brocante 6: Water Jug 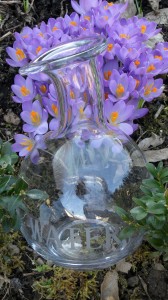 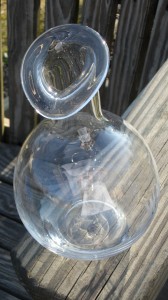 I’m posting this water jug as much for itself as to welcome the May. (“Bring flowers of the rarest, and blossoms the fairest from garden and woodland and hillside and glade”…) It cost €3 in Annecy, is hand made and is not old, I would reckon of the last 25 years. Its appeal is both the interesting pouring mouth – it’s held in the opposite way to the obvious in order to ensure no dribbles – and is etched rather than engraved with the English word “Water.” 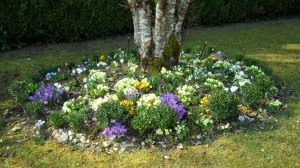 I bought the jug in March and took the photograph when the first of the spring flowers, crocuses and primroses were appearing. The bed encircles a beech tree which has grown so much in the few past years we had to lop it by half last year to comply with local regulations regarding the height of trees bordering neighbouring properties. We have a wondrous machine which we call “Fargo” into which one feeds tree, hedge and shrub prunings and neat chippings come out the other end. Anyone who has seen the film “Fargo” will understand the allusion.

This is the same bed this month. A couple of years ago the American homemaker guru Martha Stewart talked about planting her spring flowering bulbs….. 60,000 of them.  I don’t like planting bulbs so had just shoved the contents of a mixed bag into the ground (probably far too late in the season) hence the clash of types and colours. The unexpected appearance of the tulips was however a bonus. I had forgotten pushing the bulbs into the circle just before putting down the winter mulch. Before the flowers die off I will label the colours and at a later date transplant the various hues to more coordinated surroundings.