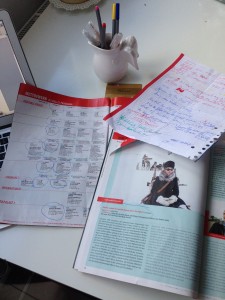 Oh the frustration! I can’t do it. I just can’t do it. The on-line booking system for tickets for the Berlin Film Festival is a mine field, a backwards and forwards relay race which ALWAYS results, when pressing the last button for payment…..in a “Session timed-out, return programme choices.” Yesterday I got a ticket for 1 that’s ONE showing – but that was by queueing in line (as opposed to on-line) by a physically ablebodied person. Dare I say unfortunately?…..had I been challenged, it might have been easier. This is how:

One goes to Potsdamer Platz. In the snow, it was easier for me to hop a U Bahn to the place I knew, rather then venturing into Audi headquarters, which I don’t. ) Why, oh why is it Mercedes, whose headquarters is just down the road in the ‘East’ (and with an excellent little café) rather than Audi – headquartered fecking miles away in the ‘West’ which is the Berlinale sponsor? Life is so hard in the First World.

In the PP Arcaden (as opposed to The Mall of Shame) one finds 2 long queues, so one does another recce and finds a ‘Handicapped’ desk. Two windows, 1 customer booking. One asks “Tickets?” They answer “Are you handicapped?”One responds “Er… no.” (One could go into details about one’s inability to post letters or understand money or technology but one doesn’t want to bore them.) They reply “This is only for handicapped bookings only.” One says “But there’s nobody here, if a handicapped person comes along, I’ll gladly move back.” They laugh “But we only have handicapped SEATS” “Oh” one says “You mean in the end of rows, or wheelchair access spots?” They laugh again, so much one sticks out just the teenny tiny tip of one’s tongue at them. They laugh even more.

One thinks of brothers Christy and Michael Dunne, excellent traditional musicians who used to busk outside Roches Stores in Cork and at least one of whom was blind. (I have an original of the iconic picture of the Dunnes I was given by the Cork Folk Festival photographer, but it is framed on a wall in France, and with all the “INCORRECT PASSWORD AND LOGIN NAME” I have forgotten how to pull one from the web.   In the meantime (i.e. until my husband comes home) see http://www.advertiser.ie/galway/article/29160/the-dunne-brothers-busking-in-galway   Anyways, I thought of Christy and Michael and how they when they once annoyed a neighbour on the Northside and she shouted after them “That you may be cured!”

Then one goes to another kiosk, where there are 2 online ticket pick-up desks and one which they tell me is for o’rnry tickets….BUT ONLY USING MASTERCARD. One rifles through wallet (one isn’t very good on finance) to see if one has a MASTERCARD. Swiss? No. German? No. Aha! FRENCH. Off we go…..pieces of paper flying over one’s shoulder, crumpled paper at one’s feet, programme already torn, notes frayed, nerves frayed. After all but BEGGING, offering one’s body….nay one’s SOUL….even MONEY for tickets to the two films one REALLY wants to see “Queen of the Desert” and “Nadie Quiere La Noche” (Until the End of the World) both Ballsey Lady films, one, the new Werner Hertzog, about the explorer Gertrude Bell who was probably responsible for the current incomprehensible, inhuman excesses of ISIS. The other film ais bout about Josephine, wife of Robert Peary the Arctic explorer, with Gabriel Byrne.

The Irish and the northern Indians have at least one ancient, non-violent tradition of protest in common. In the pre-Christian Irish tradition, the injured party fasted on the doorstep of the offender. It is speculated that allowing someone to starve on one’s doorstep was such a great dishonor to the household, that they had to admit their wrong-doing, thus clearing their doorstep and their name. In India the practice may have been in use from around 400-750 BC, until it was formally abolished by the government as a recognized public form of protest in 1861. I think I shall go starve on the red carpet at the Berlinale Palast, until, ashamed of being deemed ‘inhospitable’ Werner Hertzog, Isabel Coixet, Gabriel Byrne, Juliette Binochet or Festival Diretor Dieter Kosslick lets me in.

And this is my background music: I know it isn’t Parry, it is Lord John Franklin, but it is still an Arctic explorer’s wife’s lament and it will do for my purposes, for they all starved in the snow. It has been recorded by Sinéad O’Connor, Pentagle, John Renbourn, Bob Dylan and Liam Clancy amongst others, but my favourite version is by the Canadian Valdy (Paul Valdamar Horsdal) but can’t find that online, so here’s Mícháel O’Domhnaill and Kevin Burke.

“We were homeward bound one night on the deep

Swinging in my hammock I fell asleep

I dreamed a dream and I thought it true

Concerning Franklin and his gallant crew

With a hundred seamen he sailed away

To the frozen ocean in the month of May

To seek a passage around the pole

Where we poor sailors do sometimes go

Through cruel hardships they vainly strove

Their ships on mountains of ice were drove

Only the Eskimo with his skin canoe

Was the only one that ever came through

In Baffin’s Bay where the whale fish blow

The fate of Franklin no man may know

The fate of Franklin no tongue can tell

Lord Franklin alone with his sailors do dwell

And now my burden it gives me pain

For my long-lost Franklin I would cross the main

Ten thousand pounds I would freely give

To know on earth, that my Franklin do live”