Last week, in 37c temperatures beside the lake, under the Alps, it was too hot to walk barefoot on the timber deck, so donning flip flops, wielding a long handled loppers, I went out to cut for kindling the mound of branches between swimming pool and clothesline (from with the making of my tree house…..well, tree platform; it doesn’t yet have a roof or lace curtains, but the leaded lights are ready to be installed.) Though no Saint, somehow –  as with Gobnait of Ballyvourney –  bees, wasps and hornets have always been attracted to my ambit, but they do their thing, I do mine, and rarely do the pedestrian and the wingéd worlds collide. I admire and preserve the delicate, papery hexagon of wasps’ nests and this year we have two: one in an open timber cupboard by the woodpile, another shaded by wisteria in the rafters of the loggia. 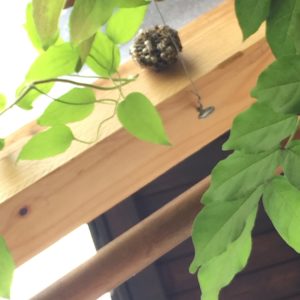 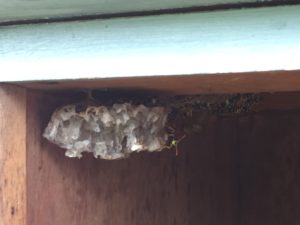 Enraged by the disturbance of dragging and chopping in their neighbourhood, the wasps left their complex papery condominium and attacked. What can a woman do – half naked in her bathing togs, alone in the house? I jumped in the swimming pool. Sloughing wasps, I emerged from the water with 5 stings: on chest, forearm, palm, thigh and hip. Teeth zinging with shock and a high pitched symphony of pain, I went upstairs and zapped each sting with a thingy which disperses the poison of insect bites/stings through heat.  Then I applied ‘Apres Moustiques’ cream and lay down.  After a few minutes the pain subsided and I got on with life….but left the loppers discarded on the deck. 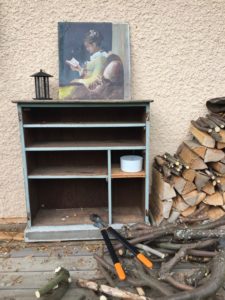 Next day, Himself, the dearly beloved, arrived home. He was zonked after a long flight from Abu Dhabi and five days of tough-at-the-top negotiations in a blood-boiling 48c desert city heat. Eating outside, I pointed to the wasp nest in the loggia roof and told him it was condemned as I had been attacked and stung 5 times. “Were you eating fruit?” he asked. No, I was cutting beech branches with an orange handled loppers by the woodpile. “That must have been terrifying” he commented.  End of discussion.

Next day, as I was preparing peaches in the kitchen – cutting up to freeze firm fruit for puddings, juicing the soft and bruised ones, for I harvested the lot, no longer willing to share with the little yellow striped feckers the bounty of the garden we both share, I heard a roar and Himself came storming in. “I’ve been stung by wasps!” he bellowed, doing a not-so-elegant man-dance of pain and outrage. Not just his male dignity, but his male body had been violated and besides, with a bite on each arm, he was a sore boy. Oh how I longed to say “Were you eating fruit?” Calmly, quietly, I brought him upstairs, sat him down, zapped him and rubbed cream on his arms as he loudly complained.  “What happened?” I asked “I was chopping up the branches at the woodpile with the orange handled loppers…and they just attacked” he whined.

That’s what’s called called karma. It’s called not hearing or empathising with what had happened the previous day to your beloved wife. It’s called “Man sting.”  (Credit where credit is due: After a rake of booze and a good night’s sleep, he hasn’t complained once since.)