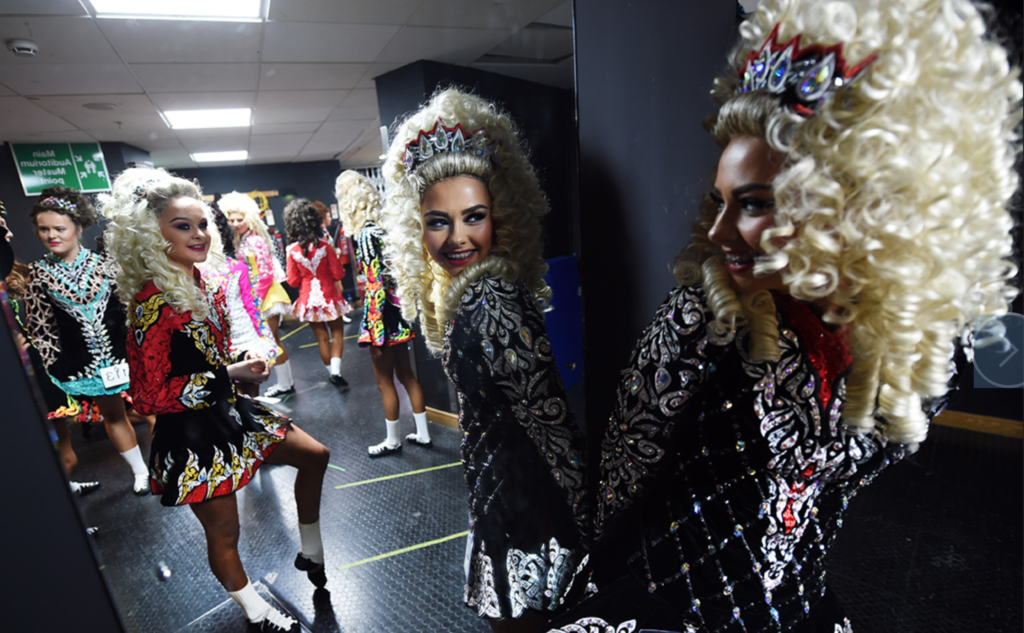 One of the most enjoyable gigs I ever covered as a journalist was the World Irish Dancing Championships when it was held in Cork. I wish I one of the 7,000 spectators along with the 1,600 competitors at Oireachtas Rince na h-Éireann 2016 – the All Ireland Irish Dance Championships – in Belfast this week…..but here, instead, are some wonderful pictures from the Guardian newspaper:

Before Director Moya Doherty’s “Riverdance” interval segment in the Eurovision Song Contest in 1993, Irish dancing was a very different beast.  Dancers were po-faced, arms by their sides. “Dancing from the waist down” illustrated a suppressed era.  All but the legs of the dancers were rigid…..their costumes were lined, interlined and stiffened with shoals of zoomorphic embroidery.  This could, perhaps, be traced back to  political correctness…..for the only arm movement was traditionally a clenched fist, a threatening gesture set to jig time music known as a “Tune of Occupation.” After Eurovision 1993, Irish dance costumes became simple, sexy, fluid and the dancers wound and wove their bodies to the tunes. The demonstration dancers at the Féiseanna and competitions however, still hung on for dear life to their much adorned dresses.  And as for the boys……. 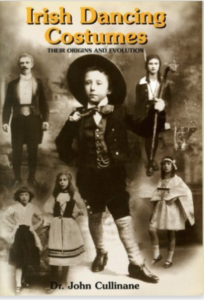 The Irish have always danced, the original form remaining, but through the centuries, enhanced by  migration and invasion.   First it was ‘Celtic’  Druidic ritual, celebrating nature (in particular trees) and the sun, then (with the Normans, that reckless, heart-led race) love. Presumably, they also danced purely for the craic. Solo Irish dancing is almost exclusively an oral (visual) tradition.  “You couldn’t notate such a thing as a ‘Lord of the Dance’ according to Dr John Cullinane, one of the world’s top judges of Irish Dancing. I interviewed John in 1997 for the University College Cork magazine “The Graduate” on the publication of his book “Irish Dancing Costumes, their Origins and Evolution.”  A dancer himself, John is an authority on Irish dancing, with an extensive archive and is the author of several books. His trade and ‘day job’ was as a botanist, he lectured for 4 decades in the Plant Science Department in UCC, specialising in seaweeds.   When not teaching, up the Amazon studying tree ferns in the rain forest, or diving in Ventry Harbour, his working life involved sitting in dark halls to the sound of dancing feet.

The first written evidence of Irish dancing is from a state letter from one of the courtiers of Queen Elizabeth of England who described what can be taken as a ‘rinnce fada’ (long dance) by girls in Galway. And what did they wear for the dance?   God knows. The Irish do not have a traditional ‘native’ garment, so, with oppression, changing politics and fashions, a form of costume was adopted to enable and highlight movement. The first known photograph of an Irish dancer is of a young boy, Ambrose Brunton of Kilkenny, wearing knee-britches and a waistcoat with a big bow tie, a large-brimmed hat and carrying a walking cane, taken in 1892.  What girls and women wore is not documented until 1913.  There is a photograph of John Cullinan’s mother, taken in 1916, wearing a “Colleen Bawn” hooded cloak.  As part of the ‘Celtic Revival’ this is what was considered ‘Irish dress’ and worn by the more nationally minded for First Communion and Confirmation.  It was, in fact, very close to a Dana at Eurovision costume (1970) the dress in wool with Celtic spiral decorations in braid.

As Irish dancing got more and more popular internationally, Lycra came into its own and television made darlings of dancers, gymnasts and figure-skiers, costumes became more and more elaborate. In a “Home of Irish Dance” blog interview recently, Antonio Pacelli of the Wembley based emporium asked John Cullinane “What do you think about the new trends in dresses and wigs?  Do you feel this takes away from the dancing or Irish traditions?”  He replied:  “Personally, I do not like the excessive use of wigs and the fact that the dresses nowadays no longer bear any Irish emblems or anything to identity them as being Irish – but that is the price we pay for the tremendous global  popularity.” 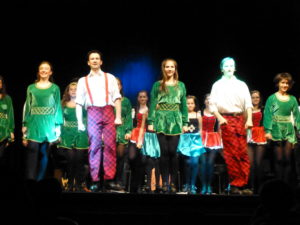 A Romanian Irish Dance group at the St Patrick’s Day Festival in Bucharest, 2013

“The original dancing costumes were introduced as a need to express our Irish national identity. Now 100 years on, we are celebrating the success of our Rebellion and we no longer have that need to express our Irish national identity. Ireland is now well established, and a free and very proud nation. So the Irish dancing costumes of today reflect the popularity of Irish dancing worldwide and the fact that the nature of the dancing has changed so much.”  As a member of that body, John continued: “The Commission (An Coimisiún le Rincí Gaelacha) does have legislation to prohibit the use of make-up on very young children but has difficulties in enforcing those rules.”

We cannot afford to get too het-up about what is worn to dance, in our – or indeed any – culture, or we destroy the very spirit of freedom of individual expression, of enjoyment, showpersonship, talent, and exultation in the physical movement of dance. Were we not suppressed, oppressed and punished for our inherent culture and traditions by conquerers and church, we Irish are the sunniest, least inhibited people in the Northern hemisphere. (Not for nothing have we been dubbed “White Jamaicans.”)  I say lay on the spangles, the rhinestones, the day-glo colours, the fringes, beads embroidery and the be-sparkled nets!….but then, with my penchant for rock-chic and rococo, I would, wouldn’t I? 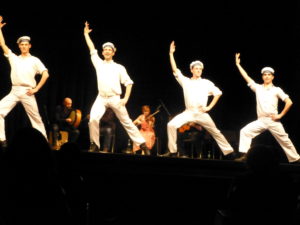 The Romanians doing a YMCA. Good on them.