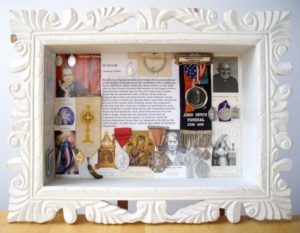 Inspired by Leonard Cohen’s “Be With Me” I made this collage of medals and relics in November 2010, possibly – sinfully – triumphantly justifying my hoarding of the family collection of such religious/superstitious – but also historically valuable – memorabilia and taliswomen. Leonard Cohen was fascinated by Saint Kateri Tekakwitha. I hope his medals, scapulars, icons and taliswomen stayed with him to the end. I hope Saint Kateri has a warm welcome for Leonard Cohen today. I hope they all live happily ever after in the Sky World. 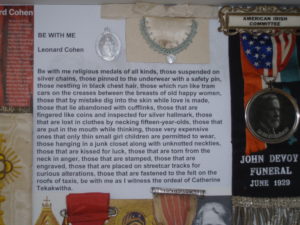 “Be with me religious medals of all kinds…”

Saint Kateri Tekakwitha, “Lily of the Mohawks” was the first Native American woman of North America to be canonized by the Roman Catholic Church. Born west of present-day Auriesville, New York, she died aged 24 on April 17, 1680. For some time after her death, Tekakwitha was considered an honorary yet unofficial patroness of Montreal, Canada, and Indigenous peoples of the Americas. The fourth Native American to be venerated, the process towards her canonization began in Baltimore (Maryland) in 1884. She was beatified by Pope John Paul II in 1980 and canonised by Pope Benedict XVI in October 2012. Based on accounts from two Jesuit priests who knew her, at least 300 books have been published in more than 20 languages on the life of Kateri Tekakwitha. One is Leonard Cohen’s “Beautiful Losers” (1966.) William T. Vollmann includes her as a character, along with French colonists and priests in “Fathers and Crows” (1992) the second novel of the Seven Dreams: A Book of North American Landscapes.