Of Margaret Drabble and Brexit 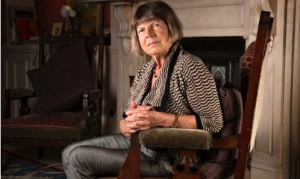 After a few episodes it became rather tedious, but there was one great song in the first series of the TV sit-com “Crazy Ex-Girlfriend.”  In the Bollywood style, the refrain to “I’m so good at Yoga” is “Look at me, look at me, I’m so good at yo….ho….ho….ho….ga” (we’ve all met them and they’re a pain.) Of late, every time I come across a reference to the upcoming British referendum on leaving the European Union, the song comes into my head as “I’m so bored, I’m so bored, I’m so bored of Bre…he…he hex…it” (If it ain’t broke, don’t brexit.)

But this post is supposed to be about the writer Margaret Drabble.  June 5th is Margaret Drabble’s birthday, and every January for the past 40-odd years, I have written the date into my diary, then Filofax (oh how quaint, how retro, how ‘Eighties!) with the name “Maggie D” and every year I say I will send her a card. But then, I am incapable of posting anything, so it never happens.  (Another date I write in each year is that of Beatrix Potter’s creation Peter Rabbit, but at least I don’t have to worry about sending him a card each September, a mere mench on Social Media suffices.) 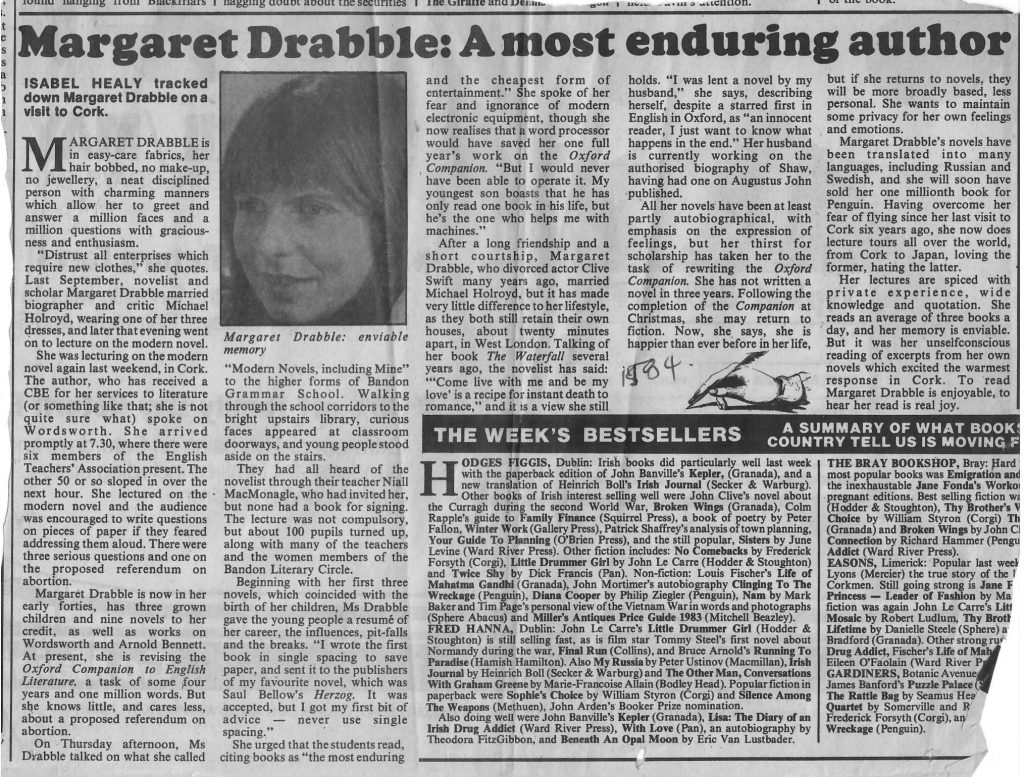 I learned Margaret Drabble’s birthdate hosting and interviewing her when she came to Cork in 1984 to talk about “Modern Novels, including Mine,” on the invitation of Niall McMonagle, then teaching in Bandon Grammar School (where one of those she would have addressed on the day was the comedian and TV presenter Graham Norton, a local lad.) With three children (one of whom is Joe Swift of BBC TV’s “Gardener’s World”…..Monty Don likes his co-presenters posh) and newly re-married, Margaret Drabble had already written nine novels and we too were young ‘uns with no money and an insatiable appetite for literature.  So Niall asked if I would host a dinner party in my flat during her visit – one couldn’t possibly call the basement which was once the kitchen and staff quarters of a grand house overlooking Cork harbour in the vicinity Trollope once stayed – as an ‘apartment’ – such terms came to Ireland much later on the back of the Celtic Tiger, in what Kevin Barry in “The City of Bohane” nostalgically calls ‘the lost times.’)  I did, and she came.  Niall took a photograph of her wearing a floppy brown wool hat (possibly mine. As she only owned three dresses – one of which she had worn or her marriage ceremony a few months before –  it is unlikely that she matched her accessories, but she and I both like hats.)  She was fun and gracious and has remained pals with Niall and his family ever since.  Thus the connection; and how, grabbing back her copy of “Country Living” my sister and I still chortle, pretending to be Margaret Drabble and her sister A.S. Byatt, squabbling over the latest edition of the ‘celebrity’ gossip mag “Hello.” 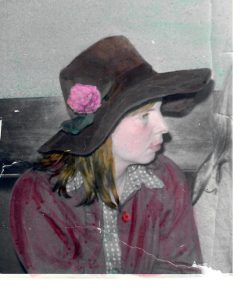 Margaret Drabble, Grattan Hill Cork, 1984. Pic: either myself of Niall McMonagle. I coloured the black and white print using inks and washing up liquid….as I was wont to do

With a multitude of distractions and discombobulations in the past 2 months (latte on my laptop being the last straw) I have neither been writing nor note-taking in my Filofax and almost overlooked Margaret Drabble’s 77th birthday  – as I had missed Billy Joe’s Ode on the 3rd of June.  (I was however thinking of Niall McMonagle as Tom McCarthy had posted: “Just back from a wonderful three days at Listowel Writers Week. Sun drenched and poetry fevered days; the most intense poetry boot-camp I’ve ever given……..Home though the Kerry countryside ablaze with fluorescent hawthorn and sun-burned revellers sitting out at beer tables by every crossroads pub and freshly painted tourist hostel. And the memory of that expression on Paul Muldoon’s face at breakfast when he encountered Niall McMonagle wearing a tee-shirt that said ‘The Racket.’ Ah, Listowel, you have the magic still.”)

So I was delighted to come across a celebration of Margaret Drabble on the day of her birthday….and it was this piece in American “The Writer’s Almanac” which brings me back to Brexit:  “…..Drabble has earned a reputation as a chronicler of contemporary England. In her novel A Natural Curiosity (1989) one character says: ‘England’s not a bad country. It’s just a mean, cold, ugly, divided, tired, clapped-out post-imperial post-industrial slag-heap covered in polystyrene hamburger cartons. It’s not a bad country at all. I love it.’ “