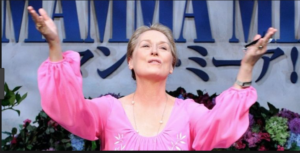 Yesterday, September 11th, was the 17th anniversary of the terrorist attacks on New York’s World Trade Centre; the day the world changed and nothing was the same again, either in the lives of those affected by bereavement, in peace and war and politics, in religious tolerance, in trade, commerce and industry and in international travel.

The actress Meryl Streep had tickets for the stage musical “Mama Mia” on Broadway in early October 2001.  Friends displaced in the aftermath of the Towers’ collapse were still staying in her family home in New York. Though their hearts were heavy and they did not feel like laughing, singing or dancing, they went to the show, to support the company. I can’t remember the exact details (from, I think, an NPR interview)  but afterwards, Meryl Streep either went backstage or wrote to the director thanking the cast for the uplift, for the respite in such a time of stress and sorrow, and for their bravery in going ahead with the production.

Some time passed and discussions opened on making the musical into a film.  The director of the stage presentation said there could and should be only one person to play the main character:  Meryl Streep. When approached, the actress said yes, she would do it…..and the rest is history.

Yesterday, family friend Nora wrote: “Though I live just five minutes away from the Lincoln Tunnel, after 9/11 I did not go to the city for a full year. It was not a conscious decision, and when the first anniversary came, I was surprised with myself, for crying alone.

Tonight I spent the evening at a Broadway show where a packed house alternately sobbed and laughed. This is why art matters in the face of tragedy. It is important because it’s a place where we can cry together.” (The show was “Dear Evan Hansen,” the tickets a birthday gift from Nora’s mother.)

This is why art matters.  This is why artists of all disciplines should be paid as much as doctors and psychiatrists. This is why we should never grudge spending, granting and gifting money to support art, for art is balm and medicine for spirit, mind and body, for the ills which plague humanity, the viruses of hate and heedlessness which spread unto mass deaths and misery without art.