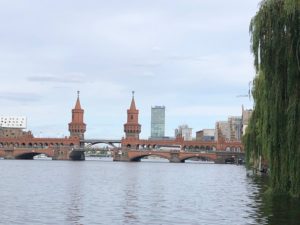 Oberbaumbrucke to the left of us

A summer evening by the River Spree in Berlin, capital of Germany.  A new green deal and the black, yellow and red of the host country, celebrating, as President Michael D Higgins termed it “Creativity, Collaboration and Community” …”Tradition, Translation and Transmission.” The date was July 4th, the occasion was the antithesis of the sad, wet, aggressive noise that was rolling out in the capital city of the United States of America.

Tánaiste Simon Coveney and the rest of us Corkonians found ourselves calling the group ‘Stargazers’ being so familiar with the Leeside trio. 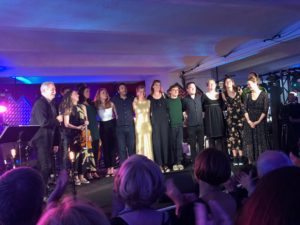 On the stage the bakers’ dozen orchestral ensemble ‘Stargaze’ looked straight out of the TV drama ‘Mozart in the Jungle.’  Joined by Irish classical violinist and traditional fiddler Aoife Ní Bhriain MA, (Leipzig) they played and grooved behind formal music stands. Berlin-based, with flowing hair and perfect fringes, the female musicians of the young European collective wore t-shirts and trousers and such as gold lamè or flowered mini dresses with sandals or dark socks and sneakers.

Lisa Hannigan of the 1940’s frocks…(now with added asymmetrical skirt) which she has been wearing for a decade and have now become mainstream fashion… came on stage to join them and the music- poetry became part African-American spiritual (a la”Down to the River to Bathe”) part talking blues, part Elbow, part Irish, partly from the seas and the seals and the spheres; entrancing and totally enchanting.  Michael D couldn’t help himself from ‘conducting’ the lilt. 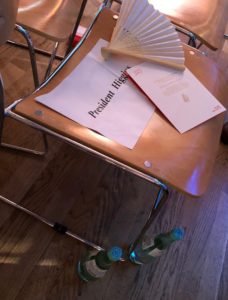 In true democratic fashion, the entire audience was seated on identical chairs.

An Embassy staff member behind President Higgins tips his shoulder and hands him a bottle of water by the neck. The President of Ireland immediately offers it to the President of Germany, seated beside him on the metal legged-plywood stacking chairs. “Nein, nein, you’re grand” Herr Steinmeier shakes his head and continues bopping it to the beat. Sabrina Higgins, in formal black, unselfconsciously helps herself to a slug offered by a retinue-woman behind her. 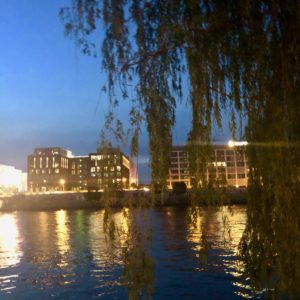 In the Berlin night, doors open to the leafy street beside the water, it was the first time I ever had to use a fan at an Irish music event (biodegradable wood and paper, courtesy of The Management.) As the music of Aoife Ní Bhríain accelerated, we beat time to the fiddle with our fans.

Event co-founder – with his wife Nuala O’Connor – Philip King joined the musician to recite “The Given Note” Seamus Heaney’s poem about the Blasket fiddler who retrieves the mysterious “Port na bPúcaí” (Fairies’ Tune) from the waters between the Blasket Islands and Dún Chaoin… “We heard it when we were out there and we had it when we came back” is how its provenance was explained.  All night, music pieces were referred to colloquially as “Chunes.” 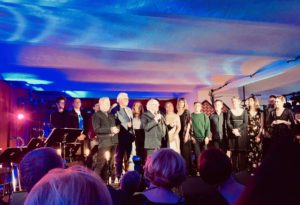 Thanking his German hosts for their  hospitality, “The Given Note” said President Higgins, is that which is shared, given to all of us. The mainland and westerly island European Presidents beamed in gratitude, enjoyment and genuine affection. When Hr. Steinmeier offered that he was one of those young Germans who in the ’70s who was listening to Irish rock, particularly Rory Gallagher, even the dour, steely-eyed, tight-jawed German on his President’s security detail smiled. The evening before, he had remarked on the popularity of Mr Higgins with all the Irish citizens, from rugby players to poets, and he added wistfully that he would never have a teacosy in his likeness.  Our President and Lisa Hannigan hugged and kissed.   “Go mbeirimíd beo ar an am seo arís” he said.  Cinnte. Agus le chéile. 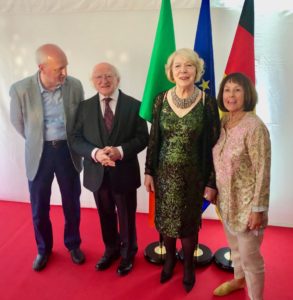