The US Presidential Election 2016

For months I have been consumed and obsessed with the US Presidential Election, spending so much time on computer, radio and television that I barely got in the harvest before the first frost hit.  I have also become a bore on social media, dealing with one topic only – the race between Clinton and Trump – to the detriment of cat videos, weather and the price of fish. And I cannot sleep for fear of a catastrophic outcome.

I am not an American citizen, nor do I live in the country, but America is our next door neighbour to the west and I love it and we (the Irish and the Americans) have always been friends. (Bill Clinton is our best friend since John F Kennedy.) I have no clout and no sway, no vote.  I don’t even know anybody who professes to support DJT, so all the comments I have posted over the past months, all the Fascinating Articles, satires and supports I have shared are of no use to the campaign to have Clinton elected.  But I have a pen, which, it is said, is mightier than the sword, and I must use it for the cause of the world, in the hope that I might sway even one person to vote for the competent, thoughtful, cultured, experienced, grounded female rather the incompetent, mindless, empty, inexperienced narcissistic male who has never given even one moment’s time to the service of his country.

How could this man Trump be a champion of the poor, the oppressed, the unemployed?  Spoiled and privileged and fawned-upon his entire life because of his money, he has never before had anybody stand up to him, criticise him or reject him and that is why he is incapable of rational thought, actions, empathy or common decency, why he thinks he is above the law.

Please, please, for the sake of the entire world, for life itself, vote Hilary Clinton.  Think of the children.  Remember at a rally last August, DJT said he ‘loved babies’…and then a few moments later told the mother – or his strong-arm force – “Actually I was only kidding, you can get the baby out of here,” and most tellingly:  “I think she really believed me that I love having a baby crying while I’m speaking…..”

Nothing, but nothing, he says can be believed. All his statements are untrue, all his promises are empty lies. He smarms and then he takes it all back: “I think she really believed me….”  could become “I think they really believed me” as he throws his bewildered former supporter into a pit if he is elected.

The youngest Trump is called ‘Barron’ in a pathetic effort to acquire aristocratic status. Trump decries China, but the Trump household has Chinese staff so the orange Barron would be exposed to, and learn, Mandarin.  He’d need it at the coal face.

When a child first learns to write, the first thing they do is to write their signature.  They write their names all over everything.  When an illiterate person learns to write as an adult, they initially do the same thing: they write their names all over everything.  Trump is still doing it.  He puts his name on everything from hotels and casinos to meat and drinks and planes.  Now he wants it on the very statute books and history of the United States of America. Trump, Trump, Trump.  Nothing else.  In countries ruled by dictators, it is the statue and portrait of the dictator which is the most common form of ‘art’. Stalin, Mao, Gadaffi – amongst a terrifying list of terrifying people – commissioned and commanded larger than life-size murals, paintings and statues of themselves, towering omnipresence equating with omnipotence. DJT does the exact same.  The only ‘art’ he owns is in his likeness, even campaign funds go on portraits.

As distraction today, the day before the election, I went to the Berlinische Galerie of Modern Art. The ‘Dada Africa Dialogue with the Other’ centenary celebration of the birth of the Dada Movement showed a (reconstruction of a) piece exhibited at the First International Dada Fair in 1920, a satire on German nationalism, which, still smarting from the wounds of WWI, was viewed with distaste. Called “Prussian Archangel” it was a wire and papier- maché sculpture suspended from the ceiling, in the dress of a German soldier.  The  figure – as the sash around its waist proclaimed – was descending “from Heaven Above” but the pig’s face exposed the bestial nature  demonstrated by the men  – marching out under the banner of “God With Us” – on the battlefield. According to the catalogue “The finish snout in the Dadaists’ opinion, was the true face of the age.” 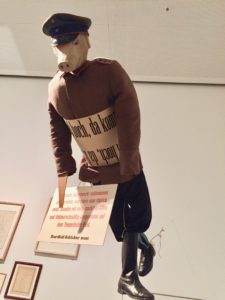 I saw it, and I thought of Donald Trump.