When I Am An Old Woman 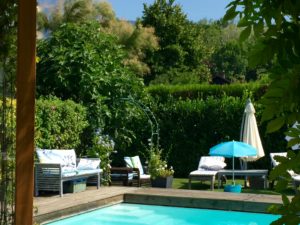 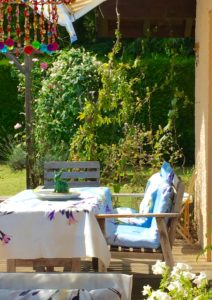 It is the last Sunday in August on Lake Annecy.  It is 38 degrees, and I am alone, sitting at the dining table on the terrace, shaded by a loggia of jasmine, wisteria and clematis, eating my Sunday lunch, before packing my Stand Up Paddle Board and heading for open water. The garden is green, the sky, the plumbago, the pool, the seat and sunbed cushions are blue.  Vine and fig leaves curl brown and gold heralding the Fall, but the full leaves and branches of the trees are barely swaying.  It is a Sunday in the French Alps, so, by law, there is no noise; nobody is using machines, cutting grass or hedges.  The eagle owl  – the ‘Grand-duc d’Europe’ who of late has been alarming the birds and disturbing my sleep  – is somewhere off in the woodland.

I am wearing a gold strapless bikini, flip-flops and a hairband. This is what I am having for my lunch: Half an avocado, Taramasalata, a brown walnut bread roll with Manchego cheese and fresh figs, a glass of pomegranate juice with water, mirabelles I picked for the meal. This is the location, the decor, the wardrobe and the food I have chosen, because I am on my own, and I can.

The 2016 Olympics are over (thank God) the Girl from Ipanema is a grandmother, Marianne of the Leonard Cohen song is dead.  Suddenly, I am a pensioner.

In about 1975 I got over the poem “Warning” by the English poet Jenny Joseph, and kinda squirm on hearing it since – popularity has made it a cliché. You know the one: “When I am an old woman I shall wear purple with a red hat that doesn’t go and doesn’t suit me, and I shall spend my pension on brandy and summer gloves and satin sandals and say we’ve no money for butter…..(for) “you can wear terrible shirts and grow more fat and eat three pounds of sausages at a go or only bread and pickle for a week.” Written in 1961, before Jenny Joseph was even 30, the poem became, over the past half century, a marching cry for the over 50s.

Jenny Joseph still writes. She too, is a grandmother. She hates purple. She doesn’t hate the poem (though does quote ‘annoying idiocies’) but, in tracing its different trajectory in England (literary) and the US (social) she is grateful for the following the poem has created.  In Britain, it was taken from an article in “The Listener” in England for an anthology (Bloodaxe, 1962) into Philip Larkin’s Oxford Book of Twentieth-Century English Verse and onwards. In the US, from an early 1980’s article on survival in the Reader’s Digest by Liz Carpenter, former PR aide to Lady Bird Johnson, it became a wildly popular greeting card and motto (“message literature”).  “I think that there is more of an obsession with and fear of age in the USA than in the UK” says Jenny Joseph. “People have used it as a theme or starting-off point to make all sorts of things, including wonderful parties. It has stimulated the inventive and seems to have provided a channel for the expression of affection and care between people.”

I don’t have to ” gobble up samples in shops and press alarm bells and run my stick along the public railings”  to “…make up for the sobriety of my youth.”  I did not have a sober youth, or a sombre youth. The decade odd between Jenny Joseph and I makes all the difference. Not only are we (i.e. women in particular, economically as well as culturally) now more free, we can eat taramasalata (the return of the cod) while wearing a gold bikini (global warming) we are living longer and more healthily. “This (whatever) will change your life!” the promos scream.  I don’t WANT to change my life.

Bring on the canicular Sabbath taramasalata……..